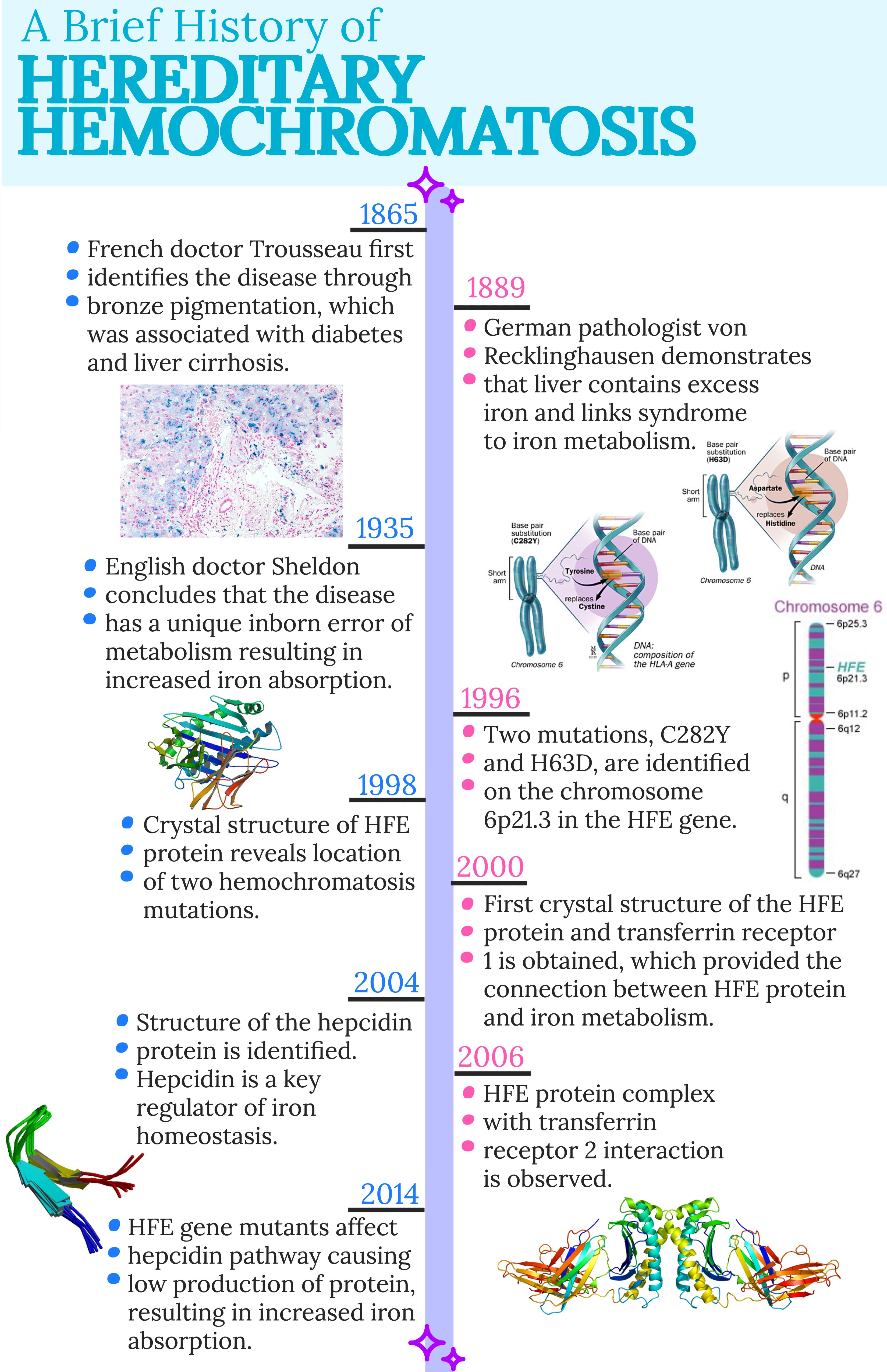 What is hereditary hemochromatosis?

How common is it?

In general, the disease has a high incidence in those of northern European descent, with an estimated prevalence of between 1 in 200 and 1 in 500 individuals. In the United States, hemochromatosis is seen in 1 in 300 non-Hispanic whites, with even lower rates among other ethnicities and races, affecting about 1 million people (Bacon et. al., 2011).

How is it diagnosed?

People with a family history of the disease are more prone to acquire it themselves. A variety of tests can screen for the presence of the disease. Blood tests of serum transferrin and hepcidin levels can be measured to detect the levels of iron present. MRI scans can detect iron accumulation in the organs. Genetic testing for the specific mutations of the disease can further verify the diagnosis for hemochromatosis.

What are the symptoms?

The most common symptoms are fatigue, joint pain, abdominal pain, diabetes, and cirrhosis (Bacon et. al., 2011). The broad set of symptoms can cause difficulty in diagnosing the disease, which is why early diagnosis is crucial for proper treatment. Furthermore, up to 18% of men and 5% of women can have hepatic iron overload in the absence of clinical symptoms (Kowdley et. al., 2019). The disease is seen more often in men than in women. Iron accumulation is slower in women due to the blood loss through menstruation (Kowdley et. al., 2019). Hemochromatosis is present at birth, but symptoms tend to manifest later in life.

Hemochromatosis is due to mutations on chromosome 6 in the HFE gene, which encodes for the HFE protein. The two most common mutations are C282Y and H63D. The C282Y is a single point mutation with a substitution at the 282 position of amino acid tyrosine for a cysteine. Also a single point mutation, the H63D mutation is a substitution at the 63 position of aspartate for histidine.

The HFE protein binds to the transferrin receptor, which causes the iron-bound transferrin affinity to decrease. Normally, the HFE protein plays a role in regulating the hepcidin protein, which is responsible for controlling iron transport into the blood. Hepcidin ubiquitinates and degrades ferroportin, which is a protein that transports iron into cells. A zoomed out view of iron absorption is depicted in Figure 1.

The expression of hepcidin is controlled via a signal transduction pathway that occurs once the HFE protein is bound to the transferrin receptor. However, the C282Y and H63D mutations of hemochromatosis disrupt the normal function of the signal transduction pathway, resulting in decreased hepcidin expression (Wu et. al., 2014). Since the expression of hepcidin is downregulated, ferroportin is not degraded and iron is continuously transported into the cells and accumulates inside, resulting in iron overload.

What are the treatments?

The most common and effective treatment is phlebotomy, which is the surgical opening of a vein for blood removal. For people who are unable to undergo phlebotomy treatments, iron chelation drugs can be administered. Although the drugs show high levels of iron depletion, the side effects are toxic and can lead to additional liver damage from excess usage.

The increased iron absorption can be targeted by proton pump inhibitors, which inhibit a specific protein that is essential for iron uptake. Additionally, dietary changes can decrease the effects of iron overload. Specifically, consumption of red meat, limitation of vitamin C, and no consumption of raw shellfish are examples of ways to decrease the rate of iron accumulation (Adams et. al., 2010).

Kawabata, H. The Mechanisms of Systemic Iron Homeostasis and Etiology, Diagnosis, and Treatment of Hereditary Hemochromatosis. International Journal of Hematology 2018, 107 (1), 31–43.

This site uses Akismet to reduce spam. Learn how your comment data is processed.